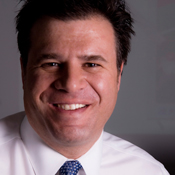 While attending the Delaware Law School in the early 1990s, Ken taught himself computer animation as a hobby. It was that hobby, combined with his law degree and a degree in economics from the University of Mary Washington that helped launch his career of entrepreneurship.

In 1995, he founded his first company, A2L Consulting, where he serves as its President/CEO. A2L provides trial support services to all of the nation’s top law firms and their clients around the world. Often called upon when the dollars at stake are high, A2L’s services include helping to predict how judges and juries will react to a case, the creation of sophisticated visual evidence used to persuade judges and juries, and the deployment and use of state-of-the-art technology in the courtroom.

Bestselling business author Dan Pink highlighted A2L in his book, A Whole New Mind: Why Right-Brainers Will Rule the Future, and Ken has been quoted by many news outlets including the Wall Street Journal, Inc., NBC News, Wired, the Washington Post, and the BBC.

Recently, the readers of LegalTimes voted A2L "best jury consultants" and "best trial consultants," and readers of the National Law Journal voted A2L "Best Demonstrative Evidence provider" in the country. Many other publications have held similar votes and ranked A2L at the top of a key category. The American Bar Association named A2L’s blog, where Ken and his colleagues publish weekly, one of the top 100 blogs in the legal industry and one of the top 10 litigation blogs.

In 2013, Virginia’s Governor appointed Ken to a four-year term on the University of Mary Washington’s Board of Visitors. He has also served on the Dean’s National Advisory Board of Delaware Law School and a variety of local and business boards and advisory groups.

In spite of an interesting and varied career, Ken still lists his top passion and proudest accomplishment as “father of triplet girls born in 2008.”
Find me on:

Three Top Trial Lawyers Tell Us Why Storytelling Is So Important

We recently had the opportunity to interview three top trial lawyers. We asked them for their views about the practice of law and about what really works at trial.