How to Use Litigation Graphics in Antitrust Cases

At first glance, antitrust cases seem like unlikely venues for the successful use of litigation graphics. Antitrust law has the reputation for being arcane, abstract and statistical, and to some extent the reputation is justified. After all, this area of law deals with the workings of supply and demand and other economic questions, and the issue is often whether competition (or potential competition) in a market has been suppressed in some way. These matters aren’t remotely within the daily experience of jurors. How can a litigator use graphics in antitrust cases to make them make sense?

It can be done. Earlier this year, a well-written article in Law360 (paywall) noted that “explaining the details of an antitrust case to a jury can be a daunting task, but lawyers who build a compelling narrative and communicate with a straightforward style stand a good chance of bringing the jury around to their client’s point of view, experts say.” The article suggested that “many jurors are visual learners, so economic evidence is most likely to stick when the spoken testimony is supplemented with visual aids.” We agree.

Rather than defaulting to showing images of statistical models or regression analyses, antitrust litigators should consider presenting their case with visuals that we are used to seeing on a daily basis. For example, maps are an excellent way to help jurors visualize levels of competition. A state or county could be colored lighter or darker, depending on the number of competitors present in a given year. The names of the competitors can be symbolized by their logos. The entry by a company into a given geographic area is well represented by an arrow, of greater or lesser thickness. “Before and after” maps are also very effective: Here’s how dense the market was before the merger, and here’s what it looked like afterwards. And so on.

Relatively simple graphic techniques, such as bar charts, pie charts and thermometer slides, can also be very useful. A bar chart can be used to show that prices stay the same (are inelastic) regardless of the degree of competition in a relevant market (or conversely, if you are the Department of Justice, that they change fundamentally). An animated pie chart might show that in a five-year period the market share of the largest companies decreased rather than increased as new entrants appeared, indicating that concerns about market concentration are overblown. A thermometer slide (also known as a growing bar chart) might show, by category of savings, how much in the way of efficiencies was achieved.

Of course, there are many other demonstrative tools available to the prosecution or the defense in antitrust matters. Venn diagram-like slides can be used to show a lot of (or a small amount of) overlap in products or services provided by competing companies that intend to merge. For the defense, showing little overlap highlights differentiation; for the prosecution, the opposite is true. Timelines, a useful tool for most case narratives, are also effective tools for presenting evidence in antitrust cases. Timelines, for example, can depict the time and effort that went into the companies’ decision to merge and to determine if efficiencies could be achieved. Or, combined with trend lines, they can be used to explain the factors that, over time, drove the decision to merge.

With a bit of creativity, the facts in antitrust cases will be no more difficult to present successfully to jurors than the facts in any other type of case.

Other articles and A2L resources about antitrust litigation, litigation graphics and related topics: 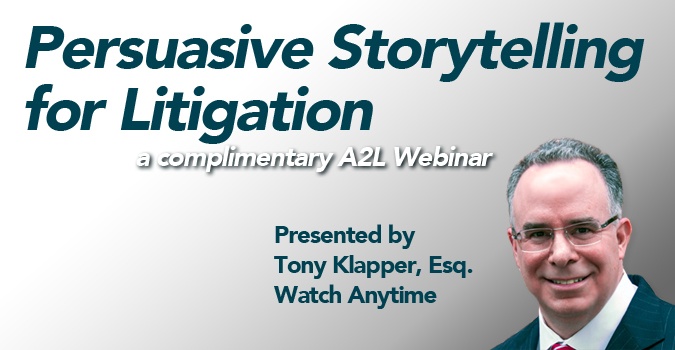 Tony Klapper is the former Managing Director of Litigation Consulting at A2L. He is now the Assistant General Counsel, Product Regulatory and Litigation at Volkswagen. Tony Klapper joined A2L Consulting after accumulating 20 years of litigation experience while a partner at both Reed Smith and Kirkland & Ellis. Today, he is the Managing Director of Litigation Consulting and General Counsel for A2L Consulting. Tony has significant litigation experience in products liability, toxic tort, employment, financial services, government contract, insurance, and other commercial disputes. In those matters, he has almost always been the point person for demonstrative evidence and narrative development on his trial teams. See his full bio at: http://www.a2lc.com/tony-klapper-litigation-consultant-a2l